An Orlando veteran is paralyzed and has numbness in his fingers. He still learned to play the guitar. 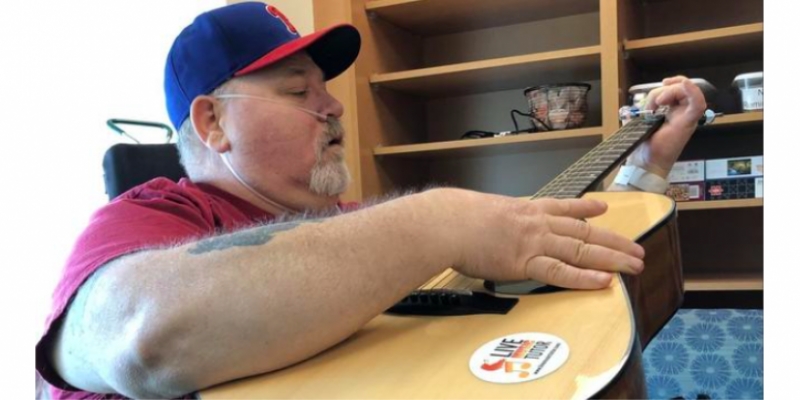 Dave Goss is in his wheelchair, gently strumming his guitar and talking about how at age 57 he’s learning to play music.

He’s a big fan of country music and an even bigger fan of George Strait, and his dream is to play Strait’s “Troubadour.”

But for now, he’s learning his chords and ordering little gadgets and tools that help him play.

This is a big deal for Goss and the people who care for him at the Orlando VA’s nursing home in Lake Nona.

Goss is paralyzed from the chest down. A few years ago, he fell from a 15-foot deer stand early one morning during a hunting trip. He broke his back and traumatized his spine. The damage also rendered a few of his fingers numb.

Although he had always wanted to learn to play music, he had never gotten a chance.

Then, a few months ago, one of the nurse managers asked him if he wanted to sign up for a 90-day program that would teach him to play music.

Plus, he has no feeling in some of his fingers, so he didn’t think it was possible for him to play an instrument, let alone the guitar.

“But a certain person kept pushing my buttons,” he said with a twinge of humor, looking at Orlando VA nursing manager Anitra Eiland. “So I did it.”

Live Music Tutor, a software technology company based in Austin, provides virtual music lessons to individuals, groups and classrooms. The company approached the Orlando VA Medical Center a few months ago and offered to donate three months of music education along with the required equipment.

The center accepted the offer and enrolled five veterans in the program. Three of them, including Goss, signed up to play the guitar, one picked the keyboard, and another one opted to take voice lessons.

To deliver the program at the Orlando VA, Live Music Tutor partnered with the Center for Music Therapy in Austin for quality oversight.

Allegra Artis, who lives in El Paso, Texas, has been an instructor with Live Music Tutor for two years. He recently participated in the company's pilot program at the Orlando VA CLC. (Courtesy photo)

“It has something to do with the brain. It also helps with dexterity with their hands. And it’s great for memory. And the repetitiveness of it, even the scales, is very helpful,” said Allegra Artis, an instructor with Live Music Tutor, whose husband is a veteran and has severe PTSD. “I know how valuable music therapy is, especially for veterans.”

So Goss starting taking lessons via a large-screen TV, twice a week for about 45 minutes each time.

“The instructor was awesome,” Goss said. “I have disability in my fingers. He went out of his way doing it until I could do it. We tried everything. It just takes time.”

Meanwhile, his nurse manager, Eiland, watched him get better acquainted with the guitar every week.

“It was really good to actually see the progression and the dedication because a lot of them felt that they couldn’t do it for many reasons. With the encouragement, they began to evolve and began to get excited,” Eiland said.

“I just think they’re more lively. It just gave them a purpose. Life is about having things to look forward to. It gives us the will to want to live every day. So just knowing that they had that to look forward to — it was just amazing,” she said.

To Goss’ dismay, the 90-day pilot is over now. Although the veterans still have the instruments, they don’t have the regular push and direction that came from their instructors on the TV screen.

“We just need more funding to continue this. I enjoy it,” he said.

Live Music Tutor was started in 2011 by Jason Goughnour, a classically trained musician who wanted to teach music to students online and address the decreasing number of music programs in schools across the country.

Goughnour needed someone to build the company’s business model. So he brought on board Ted Gee, who had held leadership roles in several companies, including MD Helicopters, Pulte Homes Sciences.

Today, Live Music Tutor has about 2,000 music instructors and 30 licensed music therapists and has delivered more than 28,000 lessons around the world, including 45 school districts such as Osceola County in Central Florida.

“When you look at the barriers to extend these programs, it comes down to resources — whether it’s instructors, instruments or money,” Gee said.

Live, virtual lessons solve some of those problems.

“The only challenge online [lessons] present is to physically move your student’s hand,” said Artis, who lives in El Paso, Texas. “But I’ve found ways around that.”

The company contracts with music instructors all over the world. It offers classes ranging from $25 to $60 an hour, depending on the age of the student and level of expertise. The cost of group lessons is $25 per student for a one-hour class and the company has different arrangements for classrooms.

Gee said Live Music Tutor decided to donate the pilot program and the instruments to the Orlando VA partly because “music therapy is a proven solution to help a lot of veterans with PTSD, motor skills or Alzheimer’s,” and partly because he is a disabled veteran and this is personal to him.

“This provides an opportunity to help and treat more veterans,” Gee said.

Stay informed of what's happening in the world of music education by subscribing to the Live Music Tutor e-newsletter.